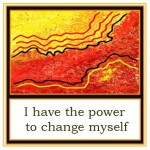 One of the most widely known and most widely misunderstood metaphysical techniques is the use of affirmations. Affirmations are statements of belief. In popular culture, affirmations have been the subject of ridicule. For example, Saturday Night Live popularized the character Stuart Smalley, played by Al Franken, with his self-help show called “Daily Affirmation With Stuart Smalley.” The character would often repeat the words: I’m good enough, I’m smart enough, and doggone it, people like me!

While Franken’s character inspired a lot of laughs, when used correctly, affirmations can be very effective. But persistence is key. It is not enough to simply say an affirmation once and wait for it to become true. Affirmations are a tool used to help to reprogram your mind from playing the same subconscious tapes in your head. Your thoughts create your reality. If you look around at your reality, you’re looking at the result of your current thoughts. If you want to change your reality, you have to change your mental programming. Affirmations provide a way for you to do that.

When you constantly repeat an affirmation it becomes a part of your daily programming. Eventually it becomes repeated so many times that it turns into a belief. A belief, after all, is simply a thought that has been repeated over and over again. When you repeat an affirmation enough, it can also become a habit. I heard Esther Hicks once say that it is a good practice to intend safety whenever you get behind the wheel of a car. I agreed with that and started thinking the affirmation “I intend safety,” whenever I’d begin to drive. I also would bring the affirmation to mind whenever I was in less-than-ideal driving conditions, such as if there were wet or icy road conditions, or if drivers around me were driving in an unsafe manner. Today, whenever I feel uneasy while driving, the affirmation automatically pops into my mind. It has become a habit for me to infuse my driving with thoughts of safety and security.

Affirmations are also used to override other thoughts – those thoughts that we no longer want to believe. Say you want to be wealthy, but you have a nagging thought in your mind that you’re always broke. You’ve probably repeated this thought hundreds if not thousands of times so it’s pretty well ingrained in your subconscious. By creating and repeating an affirmation that says the opposite – such as “I am prosperous and always have more than enough money,” you begin to reprogram your mind in a new direction. Of course, you have to repeat the affirmation many times if it’s going to eventually override the old conflicting view. That’s why the use of affirmations is a practice that must be ritualized and repeated if you’re going to get noticeable results. Depending upon how deeply ingrained the belief is in your mind, it may take weeks, months or even years to override some negative thoughts.