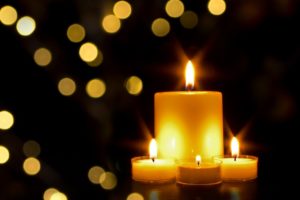 Sure, the Winter is ripe with cold weather and snow in some places. And it can be a bummer to have it get dark so early in the day. But the Winter gives us a chance to embrace the darkness and go within, and in doing so we plant the seeds that will bring our manifestations to life.

Both the Solstices and the Equinoxes reflect the cycles of life. The Winter Solstice, which takes place on the longest night of the year, symbolizes death and destruction while also reflecting hope, faith and the return to light. After all, on the day after the Winter Solstice, the days begin to get longer again and we have faith that the powerful light of Spring and Summer will once again return.

So what does this have to do with manifesting? The Winter Solstice marks a time for hibernation and going within. It’s also a time where we must have faith that we are manifesting what we want to manifest. Manifestation is both an active and passive process. We must do our part through such tactics as visualization, journaling, acting as-if and stating affirmations, but we must also have faith and allow the Universe to do its part to bring our manifestations to life. The Winter Solstice ushers in the season for us to surrender and allow the Universe to do its part.

Think of the Winter as a baby inside of the womb. The baby is growing and changing and becoming who he or she is meant to be while the mother waits patiently for the birth. That is similar to what happens in the Winter when our manifestations are being formed and prepared in a different dimension, as we wait for them to appear in the realm where we can literally see them, feel them and touch them.

A Ritual for Winter Solstice

So how can you make sure you’re taking advantage of all of the manifestation power that Winter Solstice affords? The following exercise can help.

First, think back to the last Winter Solstice. What was going on in your life a year ago? Write down all of the good things that you have manifested in your life in the past year. Imagine that those manifestations got their root during the last Winter Solstice. Give thanks for all of the good that has transpired. For me, a lot of good things happened. I improved my financial situation by paying down debt and cutting my expenses by $10,000 a year. I improved my career by making a shift to the kind of writing that I love and turning away from work that I hated. I improved my personal/social life by beginning a very promising relationship.

Next, write down the manifestations you’d like to see in the next 365-day cycle. In other words, write down what manifestations you expect to have accomplished by the next Winter Solstice. Since this year was a year of setting foundations, I’m choosing to build upon them this year. For example, rather than visualizing a relationship, this year I can visualize a stronger one that has more elements to it that I ultimately want in a life partner.

Light a white candle that signifies all of the new desires that you want to manifest during this year-long cycle. Allow the candle to burn down as you visualize yourself manifesting all of your desires. For example, if you want to manifest a better financial situation, visualize yourself spending money with ease and having plenty left over to spare.