In an earlier post, we talked about how affirmations can be helpful when you’re trying to change your thinking.  Here are some tips for working with affirmations. 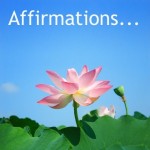 Affirmations must not only be used repetitively, but they must be formulated correctly. Despite the fact that many people spend most of their time thinking about the past and the future, the most power can be found in the present. Affirmations take advantage of this principle. Therefore, they must be formulated in the present tense. Another reason they must be formulated in the present tense – an affirmation is what you want to believe. You want your beliefs to reflect your present, not some future reality. If you formulate an affirmation that says “I want to be rich,” that suggests that you want to be rich at some unknown time in the future. And guess what? If you program your mind to believe that, it will expect your riches to always remain somewhere in the future. And the Universe will comply. Instead, it would be better to say, “I am rich,” or “Riches are finding their way to me.”

Another tip is to avoid using negative words in affirmations. Instead, flip the affirmation to its positive counterpart. For example, instead of using “I am not poor” as an affirmation, you’d want to use “I am wealthy.” Affirm what you want. Don’t mention the things that you don’t want at all!

I think it’s best to make affirmations believable. If I have $1000 in the bank and I create an affirmation that says “I am a millionaire,” that’s too far from my current reality for me to believe it’s true. When I say to myself, “I am a millionaire,” I can’t help but say to myself that’s bull-crap. And then, I’m focusing in on how far away I am from that million dollars, which is not what I want to think about.

Instead, I suggest making affirmations smaller steps that I can believe. For example, with $1000 in the bank, I can easily believe all of the following affirmations:

Thousands of dollars are coming my way.

Money is coming to me.

I always have more than enough money.

I am becoming wealthier every day.

My bank balance is constantly growing.

Some people suggest using specific amounts. I personally don’t like to do that because when I state an affirmation with a certain amount, I zero in on the fact that it’s not true. However, some people have said that using concrete numbers works for them, so I suggest that you do whatever feels right.