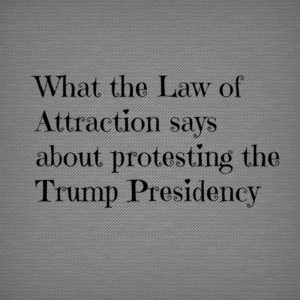 As the inauguration of Donald Trump becomes a reality, just a few thoughts about the Law of Attraction and protesting. Anyone who reads this blog knows I’m not a Trump supporter so I’m coming at this from a place of wanting the so-called Resistance to succeed.

What we resist persists. When we focus our energies on stopping Trump and stay in battle mode, the only thing we create is a more persistent and powerful Trump. If you don’t believe that, just look at how the 2016 Presidential campaign turned out.

So what’s the best way to create a different political future than the current political client? If we pay attention to the lessons of the Law of Attraction, we can do a number of things.

Hold Rallies, not Protests. Rallies are done in support of something. Protests go against something. Focus on what we want, not what we don’t want so we hold rallies dedicated to raising awareness about the America that we want to see. Let the Women’s March be a rally for all that is good about America.

Ignore the Trolls. This one can be hard, I’ll admit. When someone spreads ignorance, there’s often a desire to fight back. However, giving attention to things we don’t want creates more of them. If you argue with Internet trolls who support Trump you’re going to attract more trolls. (Trust me, been there, done that.)

Surround Yourself With Those Who Support Your Views. Find ways to leverage your voice by joining collectively with others who support you and your views. Work constructively to see that your view becomes a reality.

Visualize Success. Don’t forget to imagine a world that reflects your views. See examples of the diversity we share and the goodness that arises from it. See examples of where your worldview already exists and celebrate those examples.

You can find anything you want to find in this world. Make sure you’re finding things that are pleasing to you.