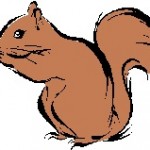 Have you ever had an animal cross your path? If so, chances are that animal had something to tell you. Animals are one of the most common signs of synchronicity. It’s no coincidence that that particular animal just happened to be crossing your path at the very moment that you were passing that way.

Sometimes you’ll be given a more urgent message when a particular animal crosses your path multiple times in a short period of time. For example, you may be driving and see a deer. Then, later that day you’re on another street and you see yet another deer. You might then notice a commercial later that night in which a deer is prominently featured. If that happens, that deer has an urgent message for you that you’d better pay heed to.

An animal doesn’t have to cross directly in front of you to have a message for you. Synchronicity also has to do with the things that you notice. There are millions of stimuli in the world so what is it about that particular bird’s call that makes you look up? Animals and insects chirp, buzz and tweet all around you each day and most of the time you don’t even notice it. So when an animal makes a sound or movement causing you to look up and take notice, that animal could have a message for you to help you to navigate your life.

Learning from the synchronicity

So how do you figure out what you’re supposed to take from the synchronicity of seeing a particular animal? Sometimes it’s obvious, particularly if you have a certain question that’s on your mind. When we see animals, we have certain perceptions about them, and your perception of an animal may be the answer to a question that you have. For example, we consider rabbits to be fast. If I’m wondering if I need to take quick action about something and then I see a rabbit, I could deduce that I’m being given a spiritual sign to act quickly about my dilemma. On the other hand, if I’m pondering that same question and I stumble across a turtle, I could infer from that that it’s best if I take things slowly.

Another way we can discover what an animal’s appearance means to us is to ask it. I don’t mean strike up a visible conversation where people will eye you strangely for talking to yourself, but you can mentally ask the animal what it wants to tell you. Or set an intention to yourself to receive clarity about the animal’s appearance in your life. Whenever you set an intention and ask a question, you will get the answer so pay attention and you’ll soon receive other signs that can help you determine what the animal is trying to say to you.

There are also books that provide information about different animals and their symbolic meanings. A great book to keep with you when you’re on the go (which is when you’re likely to run into those animal synchronicities) is Steven Farmer’s Pocket Guide to Spirit Animals. One of the strengths of this book is that it offers multiple interpretations of a particular animal’s appearance. This allows your intuition to play a role in the way your special message is received.

Among them are Animal-Speak: The Spiritual & Magical Powers of Creatures Great & Small

You can also work with  animals through Medicine Cards: The Discovery of Power Through the Ways of Animals

, which allow you to use cards to conjure up messages so you can benefit from animal wisdom without having to physically come across a particular animal. For example, you might pull one card per day, and know that that particular animal’s wisdom will be with you throughout that entire day. Say you pull up a snake one day. Your intuition will help you to decipher the exact meaning, but it could signify that there is someone in your life that you need to be wary of that day. Or it could signify that you need to shed your old skin, or shed some baggage, in order to move forward in something that day.