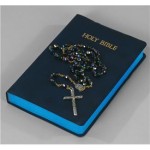 Some people fear that certain spiritual concepts such as the Law of Attraction go against their religion, but in truth, if you look closer you’ll see that all spiritual traditions have many things in common. For Christians wondering if there are metaphysical lessons in the Bible, there are plenty, and you can start with the Creation story. Charles Filmore’s Metaphysical Bible Dictionary is a good place to start studying the metaphysical interpretations of the Bible. Another resource is Steven L. Hairfield’s A Metaphysical Interpretation of the Bible.

If you look at the Creation story, it gives you a blueprint for manifesting. In the first place, humans were made in God’s image. That suggests that humans (men and women) have the same capabilities as God and should look to God as an example of how to live their lives.

Then God began to create. God created light, land, plants, animals, humans, etc. However, notice what God did — and what God did not do. God did not say ‘let me go create land and let me go figure out a way to create a community of humans and animals in this world that I am creating.’ Instead God said ‘let there be light.’ And there was light. ‘Let the dry land appear.’ And the dry land appeared.

There was power in the spoken word. God decided something should be created, God spoke the words, and the deal was done. While it is not explicitly stated, it can be implied that God knew that the spoken words would manifest into reality. If God did not believe that the words would manifest into reality, God would have done what many of us do. God would have spent time trying to figure out HOW to make something occur.

Another thing to note: Once God stated an intention, God did not hover over the situation wondering what would happen. God went on to the next task. And when God did what God wanted to do, God rested.

So what Law of Attraction lessons can you take from that story?

There are plenty of other lessons, many that are specifically for you. If you read the Bible freshly, without someone else’s interpretation forced on you, you will likely be treated to many bits of insight that you never considered.