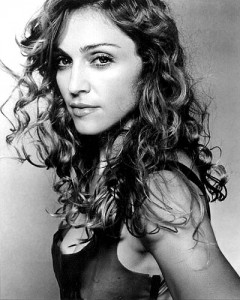 I always like to know what successful people thought about before their success arrived. To me, true wisdom results in positive results. Today I watched Madonna on Anderson Cooper’s talk show and my favorite Material Girl was asked if she knew she’d be this successful when she was young.

We all know she’s achieved her vision. She has done time as a singer, dancer, actress, author and film director. She’s been relevant for decades. I was a kid wearing lace gloves and fluorescent socks while listening to Madonna and now I’m an adult  anticipating her performance this weekend during the SuperBowl halftime show. The lessons I can apply from her interview today are:

—Think about what you want and think about it often. Don’t think about the fact that you don’t have it; instead visualize yourself with it, doing it, being it, feeling it.

—Don’t go too deep into the details. This is where I differ from some Law of Attraction believers. Some say the more specific you get, the better. I like the saying of a friend of mine that ‘too many details tie God’s hands.’ I think you should focus on the essence of what you want rather than the details. For example, if you want to have more money in your life, rather than focus on a specific amount, I suggest focusing on what prosperity feels like. So if having more money means eating in luxurious restaurants, think  about doing that. If having more money means wearing a whole new wardrobe, visualize yourself doing that. Whether you achieve these things with $100,000 or $1 million doesn’t really matter.

—Don’t worry about how. Madonna didn’t create a plan to become the top-selling female recording artist. She didn’t say she’d move to New York and become a dancer and then have a string of dance hits in the 80s. She thought about being an artist and left it at that. As her career progressed, she focused on what was currently in front of her. She couldn’t have predicted the twists and turns. Neither can you, so don’t bother to try.