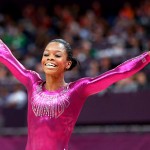 Are you watching the Olympics? If so you may have seen the gold medal-winning performance of Gabby Douglas on the Women’s Gymnastics Team. While I loved watching Gabby swing through the air, I was even more taken by her responses to questions from interviewers as three things made it clear to me that she has  a handle on Law of Attraction Principles.

Second, Gabby said she worked toward it everyday. She described having to push through the bad days and said that when you get through the bad days, you can do anything. In LOA terms, let’s apply that to those days in which our doubts are knocking hard at our desires. Consider the days when you believe you’ll never get what you want, or you feel farther away from your goal than you care to imagine. Those are the bad days that Gabby is talking about. If you can find an ounce of belief in your dreams on those hard days to focus on, as Gabby said, you can do anything.

Third, Gabby focused more on what was in her head than what was in the world around her. If you watched the women’s gymnastics final, you may have noticed that Gabby wasn’t watching the performances of her biggest competitors from other countries. Rather she had a piece of clothing over her head so she couldn’t see the activity on the floor. No, she wasn’t being rude; rather, she didn’t want what was going on on the floor to get into her head and impact her psyche. She wanted her focus to remain not on what others were doing, but on what she knew she was capable of doing. How often do you get caught up focusing on someone else’s achievements or the circumstances around you and let those factors impact your belief in yourself? Can you be like Gabby and focus on what’s in your head — which is the most important factor in your life anyway.

I’m currently reading Wishes Fulfilled by Wayne Dyer, and as I watched Gabby compete, I couldn’t help but think of Wayne Dyer’s advice. He speaks of the importance of focusing more on what’s in your head than what is in front of you. He talks about being able to shut out the negativity and the doubts of those people around you. He talks of how visualization of your desired end result is key. In fact, as he was writing the book Wishes Fulfilled, he would visualize himself often with a finished copy of the book.

So what could happen in my life if I manage, like Gabby, to put a figurative blanket over my head and shut out everything except for what I have in my head. At 16, Gabby has already mastered the art of focus, perseverance and intention. I, for one, am amazed not only by her gymnastics prowess, but by what she has taught me about LOA.

New Moon in Gemini 2020: What Astrologers Are Saying

Hear Ringing in Your Ears? You May Have Clairaudience

How to Find the Right Worry Stone