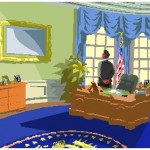 It’s hard not to notice all of the attention being paid to the presidential election, as well as the negative rhetoric being thrown around by both sides of the race. There’s no doubt that we can influence events with our thoughts and emotions, but can our thoughts play as big a role in the outcome as our vote on Election Day?

In a Vortex of Attraction workshop in Washington, DC, Abraham, a group of nonphysical beings channeled by Esther Hicks, chimed in on the presidential election, as well as how people can help their candidates move on to victory. Abraham discussed, in particular, the debates and how people can send positive energy to their candidates that can help the candidate to perform better. The key, Abraham said, is focusing on your candidate doing well and focusing on all of his positive attributes and all of the positive ways that he can influence the country.

But Abraham also talked about what not to do. If you want your candidate to do well, one of the worst things you can do is focus on what’s wrong with the other candidate. If I’m in support of President Obama and I focus my energy and attention on all of the things that are wrong with Mitt Romney, I’m giving my energy to Mitt Romney rather than to President Obama. In other words, I’m not helping my candidate at all. In fact, since the Law of Attraction tells us that what we focus on grows, my attention to Mitt Romney is ensuring that his presence and stature will grow. If I want Mitt Romney to go away, I need to take my focus off of him and, again, think about all of the reasons why President Obama will be the better President for the next four years.

So as Law of Attraction practitioners, how can we influence the presidential race?