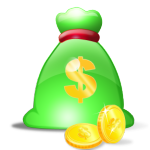 I was listening to a fellow Law of Attraction practitioner talk about how she wasn’t worried about the massive credit card debt she was running up. Nor was she in a hurry to pay it back. She was going to manifest more money.

While there’s nothing wrong with intending to manifest more money, the Law of Attraction isn’t meant to excuse irresponsible behavior. If you receive money and treat it with a lack of respect and appreciation, the greater message that you’re giving the universe is that you don’t value money. If you don’t value something, it’s not going to flourish in your life.

What this person didn’t take into consideration was the fact that she was already receiving an abundance of money, yet she was spending more than she was getting. She didn’t make a habit of saving, she didn’t focus on building savings, she didn’t attract abundance into a savings account. Her focus was on spending, and the more she focused on spending, the more she spent (and the less she had).

Another mistake she was making with her money: She was running up debt and not rushing to pay it back. One of the laws of the universe is that you get what you give. If you owe money, whether it’s to creditors or to loved ones, and you’re not making an effort to pay it back, you’re letting the universe know that it’s ok with you if debts go unpaid. As a result, don’t be surprised if someone who owes you money fails to pay up.

A third mistake many Law of Attraction practitioners make is they believe that they can make money magically and don’t have to learn money management skills. Even if you do manage to manifest a lot of money, if you don’t learn how to handle money, it will just sift through your hands and you’ll find yourself constantly needing more.

Wayne Dyer, considered by many to be a great manifester, gave his best financial advice in an article on Bankrate.com. Dyer said paying yourself first — or saving your money — was the most important lesson he ever learned. He advises that everyone save between 10 percent and 30 percent of their income. So even while you may be manifesting money, it’s important to use old-fashioned financial management skills to maintain it.