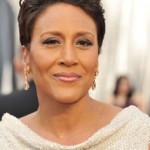 The best way to understand the power of the Law of Attraction is to see success stories and how other people have benefited from incorporating Law of Attraction principles into their lives. Good Morning America host Robin Roberts returned to the set  five months after having undergone a bone marrow transplant.

When Roberts told the world about her latest medical challenge, she revealed that she was battling MDS — myelodysplastic syndrome — which is a rare blood disorder that affects the bone marrow. She acquired the disease as a result of her treatment for breast cancer that  she had successfully recovered from earlier in her life.

So how does someone remain resilient when dealing with major health challenges? A couple of things that Roberts revealed show that she understands the power of thought and how we can positively or negatively impact our futures depending upon what we choose to focus on. Here are some things we can all take away from Robin Roberts’ experience.

State your intention early and often.

When Roberts announced that she had the disease, she told viewers through tears: “Bottom line: I am going to beat this. My doctors say it and my faith says it to me.” Roberts intended to be a survivor; intention sets the stage for your success.

Roberts spoke often about how touched she was by the countless fans of Good Morning America who sent her well wishes and told her they were praying for her. She received prayer quilts and other gifts that people around the world sent her to lift her spirits. While you sometimes have the urge to hide when life throws a curveball your way, being honest and open allows other people to lend a hand, say a prayer and send positive energy to your aid.

Roberts described how one fan of the show sent her a vision board that included words and images pertaining to healing. Roberts would look at that vision board and be reminded that her body was in fact healing, helping her to remain positive and focused on the outcome that she wanted, which was to be a survivor.

The Universe wants you to succeed.

Roberts’ manifestation of health not only helped her but it helped the world. Roberts let the world know the importance of  donating bone marrow and how easy it is. By signing up to donate bone marrow, you can save the life of someone with leukemia, lymphoma and countless other diseases. Roberts showed through her experience, and that of her sister who donated her bone marrow, that donating doesn’t hurt and it simply involves  going to the hospital for a day and relaxing while some of your marrow is taken. You don’t lose consciousness and you may be a  little tired for a day or so, but that’s about it.  When you consider all of the people who saw Roberts’ motivating story and will become a donor, it’s clear that her challenge was for the greater good and that the Universe always has a plan.

Can the Law of Attraction Save a Marriage from Divorce?

How to Communicate With Your Ex Telepathically