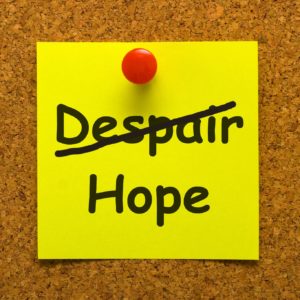 Shock, grief, fear, disgust. All are words being used to describe the fact that Donald Trump defeated Hillary Clinton in one of the most negative presidential campaigns in U.S. history. Many in the metaphysical community are wondering how could this have happened? How could such a divisive, hateful, ugly segment of humanity be allowed to be unleashed and to actually win a presidential election? What message is the Universe trying to give us?

A lot of messages, actually. It’s easy to look at the idea of a President Donald Trump as a bad thing. Too easy. However, when life is looked at in metaphysical terms, there is no ‘good’ and ‘bad.’ There are simply events designed to propel us forward in the march of evolution.

We focused on what we didn’t want.  The Law of Attraction is a pretty objective law. What you focus on grows, whether you’re focusing on what you want or what you don’t want. One of the most important lessons to master is that of placing your focus on the things that you want more of in life. Turn your head away from those ugly aspects that we want to go away and they will go away. We focused on Donald Trump and all of the horrible things that he said and we attracted more of it. Four more years of it.  Lesson: Focus on what we like; ignore what we don’t.

We showed no gratitude for the alternative. Throughout the Presidential election, people who opposed Donald Trump seemed to feel compelled to also let the world know that they hated Hillary Clinton too. Gratitude is one of our most powerful tools. We can magnify things that we want more of by giving gratitude to it. The election came down to two people who could have won: Donald Trump or Hillary Clinton. Anyone who thought Hillary Clinton was the better choice could have helped the cause by finding something about her to be grateful about. It didn’t have to be a big thing. You didn’t have to fall in love with her.  You could have been grateful that she presented an alternative to Donald Trump. And said thank you for that. Or you could have shown appreciation for how good she looked in a red pantsuit. It didn’t have to be that deep. Lesson: Find something to appreciate and focus on that.

We used repetition to our disadvantage. One of my favorite manifestation tools is music. That’s because lyrics are repetitive and if I can find a song that conjures up the images and feelings that I want to feel, then I play it over and over again to help me to achieve my goal. The media did the opposite of this during this campaign season. The media played the horrible things that Donald Trump said over and over again. How many times did we see that bus turn the corner and have to listen to Trump’s vulgar ‘locker room talk (yeah, ok)’.  In this case, our emotions were flooded, once again, with what we didn’t want so we could more easily attract more of it into our world. Lesson: Flood your senses with words, images and feelings that describe your end goal, not what you want to get rid of.

We let fear rule the day. Fear has a purpose. It alerts us to a clear and present danger. However, it alerts us so that we have the opportunity to make a choice. When we stay rooted in fear, we don’t choose. Rather we allow the fear to overwhelm us and we suffer. There were plenty of reasons for people who value diversity, inclusiveness, acceptance and tolerance to fear a Donald Trump presidency. But we needed to move away from the fear and embrace the power of choice. Half of the American people did not vote at all. Many others who hated the idea of a President Donald Trump chose to vote for a candidate who had no chance of winning because they didn’t embrace the power they had to keep someone they did not want from winning. They were afraid of their own power, and so they gave it away and chose to live passively. Yes, failing to make a choice is a choice too.  Lesson: Listen to the message that fear brings. Then move beyond it and choose.

There are many more lessons of this election and that gives the metaphysical community a lot to think about in the coming days, months and years. But the most empowering thought is that we can use the power of the Law of Attraction to our advantage too. Now that we see where we went wrong, let’s get started with creating and envisioning the type of world that we really want and desire to see.  The majority of the United States did not vote for hate. The majority simply didn’t stand in their power and use Spiritual Law to their advantage. But that can change now. After all, the Universe is on the side of love.