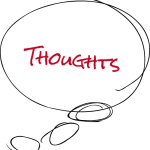 When you start to work with the Law of Attraction, you realize the importance of your thoughts. You work to cultivate thoughts that are in alignment with what you want. You note when your thoughts move toward lack rather than abundance, and you understand that it’s crucial to see the outcome as you want it to be rather than staying frustrated with what is.

But what do you do when there is a pesky little thought that refuses to lessen its grip on you? How do you stop thinking a negative thought that keeps repeating itself even though you have been trying to be more positive?

First of all it’s important to believe that it is possible to get rid of unwanted thoughts. No matter how deeply rooted the thought may be, you can take control over what runs through your mind.

Secondly, you must accept the fact that it may take some time. Most likely the thought is so powerful in your life because you had it for years. You’re likely not going to get rid of such a strongly held belief in a day.

Next, commit to embracing the thought. You’re probably thinking, ‘I don’t want to embrace that thought,’ but remember, what you resist persists.  It’s true that you don’t want to keep this thought for the rest of your life, but can you accept the fact that this is a thought that you have today? Before you can change anything in your life, it’s important to accept where you are. For example, it’s easier to lose weight when you’re able to look at your body with love the way that it currently is. Tell yourself, ‘this is my thought today, but I know I will have a more expansive and abundant thought tomorrow.’

Then, come up with a countering thought. This is when it gets fun. Come up with a thought or affirmation that is counter to the thought you want to get rid of. For example, if the thought you’re trying to replace is ‘I never have enough money,’ the countering thought might be, ‘The amount I need is on the way.’ Saying that something is ‘on the way’ is often easier to wrap your mind around. If you say ‘something is here’ that you logically don’t see, your doubts and cynicism might get in the way.

And that is when you can begin to plant more thought of abundance that can take root.

Crystals for Grounding During the Coronavirus

Signs you have a psychic connection with someone