There has been no shortage of high-profile lawsuits in recent months. From the Jodi Arias case to the Trayvon Martin proceedings, there are many examples of legal proceedings taking the spotlight. Perhaps the popularity of high-profile cases is what prompted the large number of judge shows that can be found on television, where people can get their civil cases solved on television by a celebrity judge.

But do lawsuits serve to bring closure to a situation or do they create more conflict? According to the Law of Attraction, the energy that you put out is met by a similar energy. You reap what you sow. If a situation frustrates you, you’re going to attract more frustration. If you can figure out how to make peace with something, you attract more peace. So using that same bit of reasoning, doesn’t it stand to reason that if you approach someone in a combative way, which is what happens in lawsuits, you’re going to attract that spirit of combativeness. 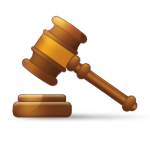 The short answer is ‘yes.’ A lawsuit by its very nature is about conflict so when you enter into one with the spirit of conflict, you’re most likely going to attract more conflict from the other person. Often the tension between two people rises during a lawsuit, as each person  has the intention of winning. Cooperation and collaboration often fall by the wayside as competition is the overriding spirit. Have you ever known someone who has gone through an ugly divorce? Even if it doesn’t start off that way, often the couple involved end up fighting over everything.

So from a Law of Attraction standpoint, are lawsuits ever a good thing? Yes, they can be.

Have you ever heard the saying, ‘you teach people how to treat you,’ or the way we treat ourselves is the way others treat us? There is Law of Attraction wisdom in those beliefs, as well. If you treat yourself badly,you’ll attract more of that as others will treat you badly, as well. Also, if you allow others to treat you poorly, not only will they continue to do so, but you’ll attract more people in your life that treat you badly. It’s as if you’re telling the Universe, ‘this type of treatment is ok with me.’

Sometimes it’s important to say a resounding ‘NO’ to someone. And when that person doesn’t listen, a lawsuit may be the answer you need. Sometimes a lawsuit can be a way for you to scream out to the Universe that you will not accept a certain type of behavior anymore. In these cases, it really doesn’t matter if you win or if you lose; by engaging in the lawsuit itself, you’re exerting your power and stating what is acceptable and what is not acceptable in your life.

Of course, there are may lawsuits filed that don’t fall into that category. If you’re fighting someone simply to get an undeserved payday, or you’re just using the courts to take out your personal frustrations, your experience may not be as satisfying as you’d like. Only you know your ultimate intentions. But understand that the Universe responds to your personal truth, whatever that might be.