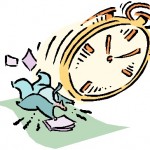 I’ve often heard people come down hard on themselves or others for putting off a certain task rather than getting it done right away. While I’ll admit there are times I put off overwhelming tasks like cleaning out a drawer or closet, other times I’ll avoid doing things that will only take a few moments of my time if I just buckle down and do them.

But is procrastination bad? When you feel hesitant to do something, sure it may just be laziness, but could it also mean that on some level you know you’d be better served waiting it out? Last year, I planned a trip to visit a friend who lives in the Virgin Islands and I noticed that I was dragging my feet on buying my plane ticket. I wasn’t dreading the trip; on the contrary, I was looking forward to it. Ironically, my procrastination ended up working out in my favor since the friend had to leave town for a family emergency at that exact same time.

I once worked with a writer who procrastinated for years in finishing a novel. However, when she finally finished it and sold it to a major publishing house, her agent informed her that the part of the novel that was inspired by a recent event was what the publisher liked most and what led to the sale. Had this writer not procrastinated in finishing her novel, the part of the book that fueled the sale would not have been in there.

Want to take a closer look at your procrastination?

Next time you want to put off making that phone call, following up on that business contact or finishing that project, instead of forcing yourself to do it, honor your resistance.  Give yourself permission to wait a couple of days and ask yourself why you’re reluctant to move forward. You may find that your actions yield better results at a later time or that the action is one you’d be better served not taking.