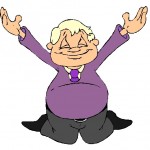 Scheduling time for your worries is a great way to reduce their power over you, but you can also worry less and attract more peaceful thoughts by making a shift in focus. If you’ve ever read any of the Law of Attraction books by Jerry and Esther Hicks, you may be familiar with the concept of moving your thoughts from being specific and detailed to being more general and vague. You may have learned in school that its better to be specific and detailed, but when it comes to negative thoughts and the Law of Attraction, you’d do better mastering the art of being vague.

When you’re thinking about something you’re worried about or don’t like in your life, chances are you can describe it in much detail. For example, if you hate your boss, you can probably describe to someone all of the reasons you hate him. For example, you hate the way he interrupts you when you’re talking, you hate how he takes credit for your work and you hate how he has a tendency to speak to you and your colleagues in a condescending manner. When you describe all of the reasons you hate him, you’re focusing on all of the negative attributes. Not only does that attract more similar experiences to you, according to the Law of Attraction, but it probably makes you feel bad in the process.

Each time you shift your negative thoughts in a more general direction, you’re decreasing the power they have over you and you’re likely feeling better about your life and situation in the process. As you focus less on the things that get you down and more on the ones that lift you up, you’ll attract more uplifting thoughts in the process.