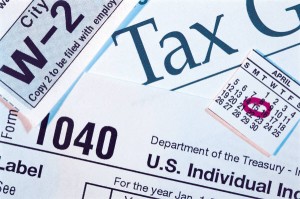 This weekend I heard several different people complaining about the fact that they had to hurry up and get their taxes done before this year’s April 17th deadline. In each case, there was a sense of dread about the experience, as if each person just knew they were going to be knocked over by the tax bill.

Of course it’s not unusual for people to dread tax day. But it got me to thinking what this might mean from a Law of Attraction standpoint.

What we focus on grows, so if we’re focusing on how much we hate tax day, aren’t we going to attract reasons to hate tax day? We typically prove our expectations right. We’re always finding evidence to bolster our views of the world.

Money, in particular, is a very charged subject for many people. I thought about my own experience with credit card debt. I was in debt and I dreaded the time that each of my bills would be due. Every month, I felt like money was being taken from me, and I felt that I never had enough money to enjoy my life since I was spending all of my money paying off credit card debt. It also seemed at that time that the balances never seemed to go down. I didn’t really know how much I owed (I didn’t want to know; it was that distressing to me). All I knew is that I owed a lot .

After reading Money and the Law of Attraction by Esther and Jerry Hicks, I stopped and examined how my thoughts about money were contributing to my being in debt.

First of all, I realized that ignorance was not bliss. Ignoring my financial situation was not going to help it to improve. I added up all of my debt and boy, was it a big number. Then I thought about some of the points that Esther and Jerry had made. My focus on that huge pile of debt was only adding energy to something that I didn’t want. And like I said, I felt like the amount was, if not growing, definitely not getting any smaller. But how could I pay my bills without focusing on the debt since I would be looking at the debt every single month?

I came up with a solution. I created a spreadsheet and tallied up all of my debts. The next month, I updated the spreadsheet to reflect the new balance. Then I highlighted the number that reflected the amount that the debt had decreased. So the first month, after paying my bills, my debt balance was $241 lower.  The second month, it was $560 lower. And so on, and so on. As I watched my bill balances drop, I began to feel energized and even started to look forward to paying my bills. In the book, Esther and Jerry (or better yet, Abraham, the spiritual being that Esther Hicks channels) talk about how anything that you feel good about is bound to yield good results. I was feeling good about paying my bills because I was enjoying watching myself dig myself out of debt.

That experience was the beginning of a transformation for me when it comes to money. The better I felt (and I put into practice many of the exercises that Esther and Jerry laid out in the book), the more good luck I seemed to have with money. I received a two-year 0% APR credit card offer, which allowed me to transfer balances and pay off my debts even faster since I had two years free of interest. I started having even better thoughts about money. For example, I was grateful for the savings I had, and my ability to pay my bills. Around this time, I even changed my attitude about tax time. Being self-employed, I typically have a tax bill. I am not one of those people that look forward to a hefty refund. So in the past, like the people I spoke with this weekend, I would dread the middle of April. But after I started changing my relationship with money I even changed my opinion of tax day. I became grateful that I made enough money to warrant having to pay what I paid in taxes.

For the last couple of years, I have not waited until the last minute to have my taxes done, and I have not  grumbled at writing that check. And unlike in the past, my better attitude has been rewarded by my having enough money for taxes without having to scramble at the last minute.

What are your thoughts about money and tax day? Changing your mind could really pay off.

New Moon in Gemini 2020: What Astrologers Are Saying

Hear Ringing in Your Ears? You May Have Clairaudience

How to Find the Right Worry Stone